By Brian Wilson, Scottish Wedding Photographer, Edinburgh. Reviews
Hilary and Duncan, Carberry Tower, Dalkeith, Midlothian
Carberry Tower just outside Musselburgh in East Lothian is a surprise although it shouldn't be. I'm well used to shooting weddings at hidden gem houses set in glorious grounds in Scotland, but Carberry does have some stunning features. First of all is the 500m long driveway, perfectly straight, with the mansion sitting in splendor at the end. I challenge any driver, on their first visit there, to tell me what other features of the drive up they can remember and describe. The house grabs your attention and keeps your focus all the way. Its a 19th century design, conceived by the Victorians of what a medieval castle should look like and, consequently, it looks nothing like a true castle although the rounded tower and spires offer an artists impression of antiquity. Inside it's warm, welcoming and there is no doubt you're in the Master's pile. The staircase is beautiful and on the first floor (second floor for our American cousins) is the Music Room, Library and Drawing Room all and each delivering the pleasant, relaxed and ancient style that has come to be known as Scots Baronial.
This was where Hilary and Duncan chose to have their wedding and a good choice it was. I've been at Carberry Tower before and one good thing it has for a wedding is there is as much choice for location and shooting inside as there is outside, so if its wet outside there is no crisis.
It was wet outside. It was flooded outside.
It had been raining constantly for the whole week and the Rose Garden was under water as was much of the grounds. Despite preparing for all eventualities, I'd not packed my boat but I did have my box of coloured umbrellas and my waterproof boots. Hilary had no such luxury and the walk to the chapel - about 100m outside - was one that she couldn't do on her own otherwise her dress was ruined. Bridesmaid plus staff came to the rescue making sure the dress stayed clean and dry. Later in the evening when we tried a driveway shot in a Vettriano-esq "Singing Bulter" attempt it didn't matter too much about the dress. Our window of opportunity came when the rain paused for breath, but by the time we started shooting (without any real preparation and only a camera mounted flash for lighting) it began raining again.
This was my only opportunity outside in the whole day and Jack V has no worries that I'll be infringing his copyright. A critical review by my peers would give me 1 out of 10 for attempting it under the circumstances, but no more. I like it though because I know how wet it was outside - you can see the rain for yourself.
This sample of shots are all in monochrome (except the Singing Butler attempt)  but it wasn't a black-and-white wedding; I just like these ones. 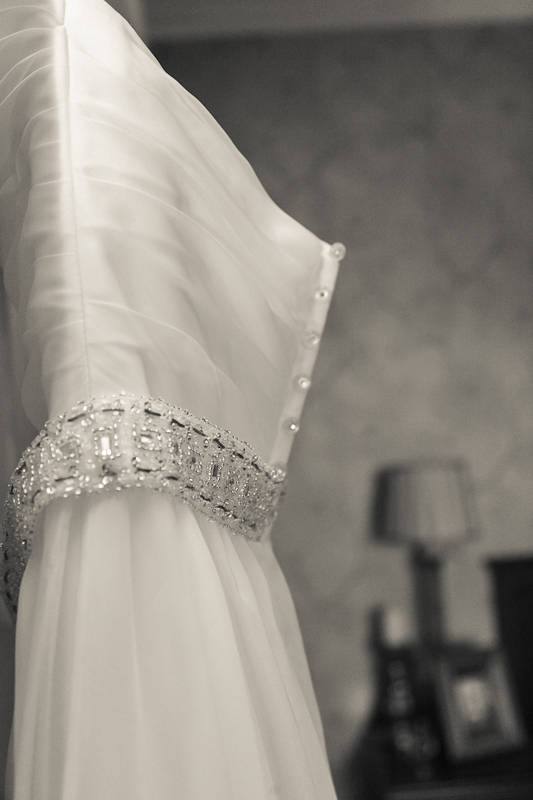 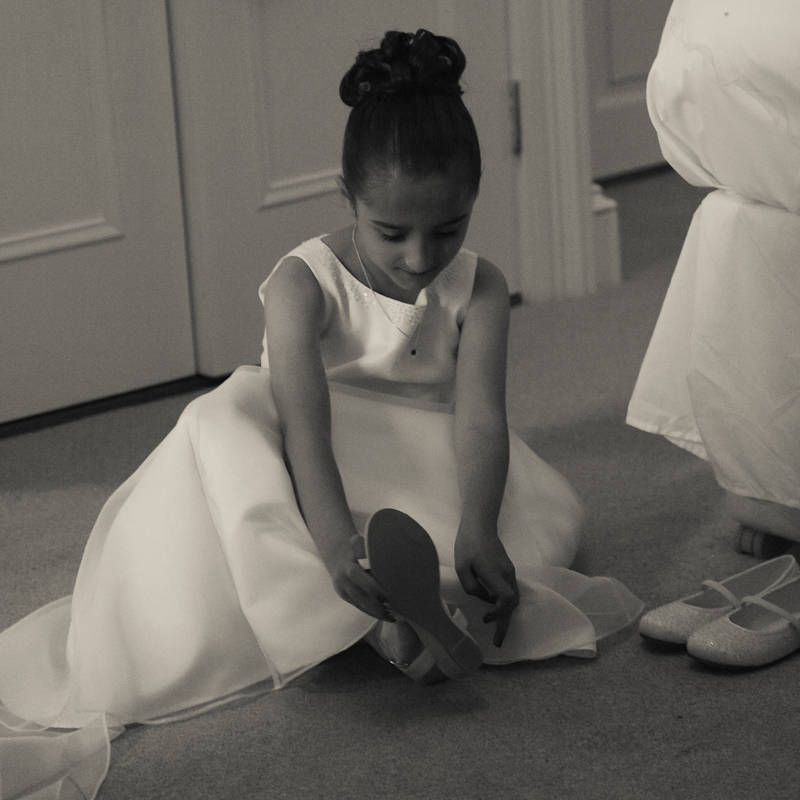 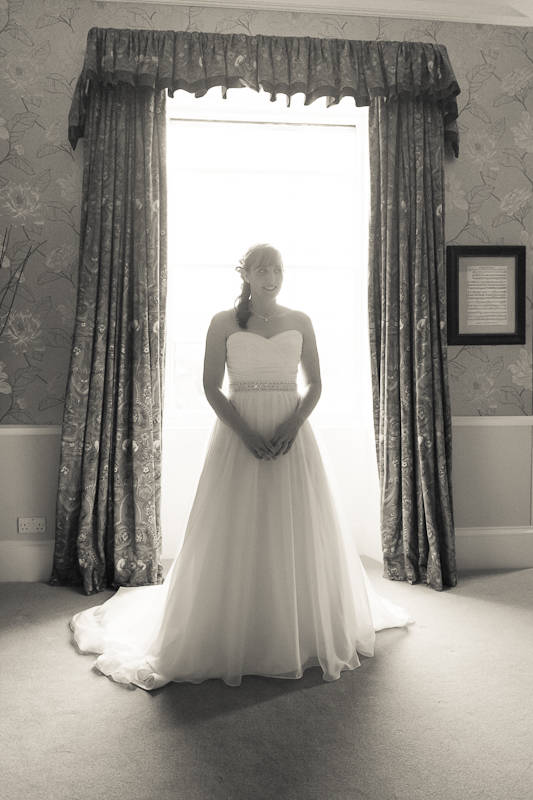 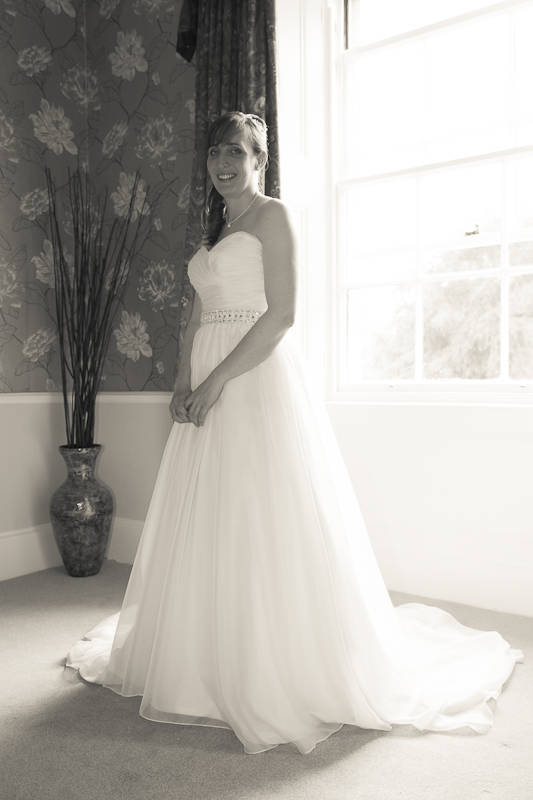 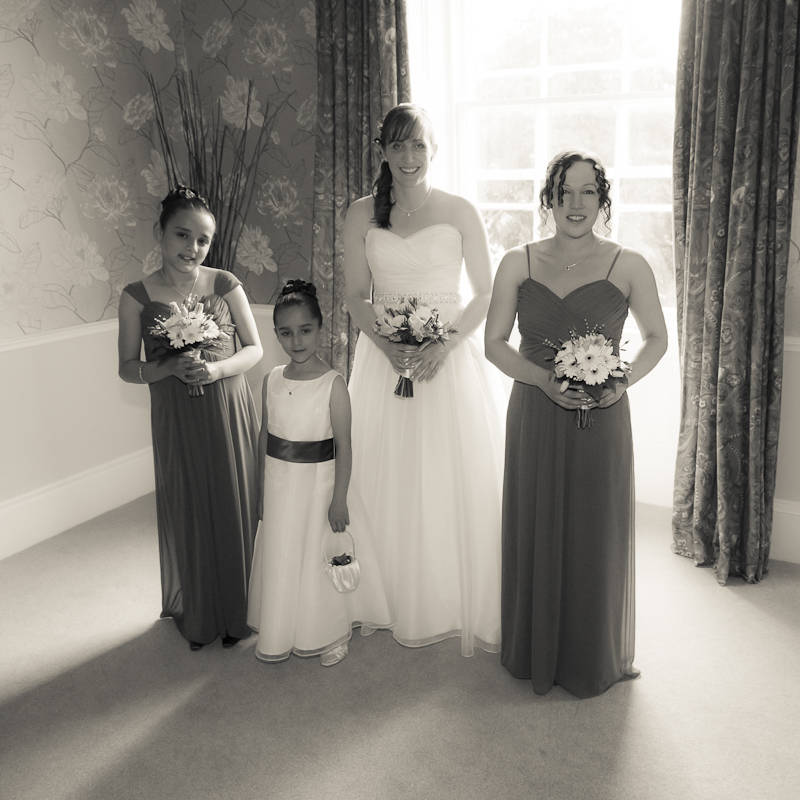 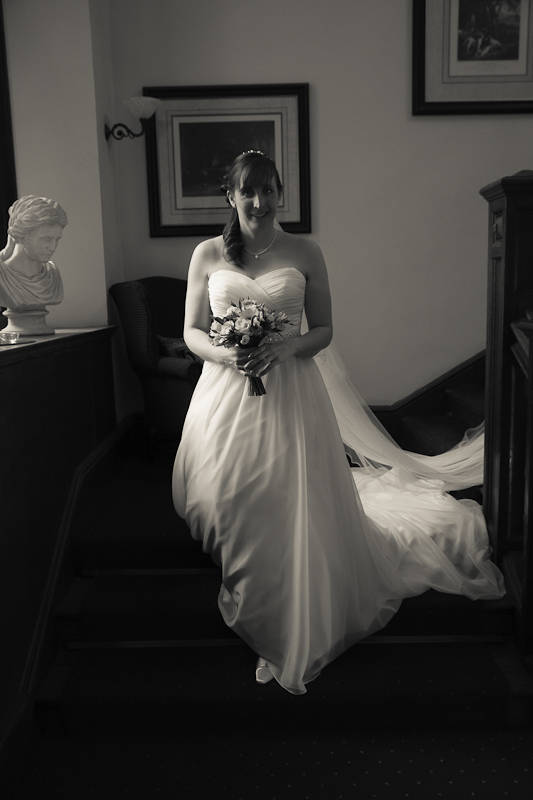 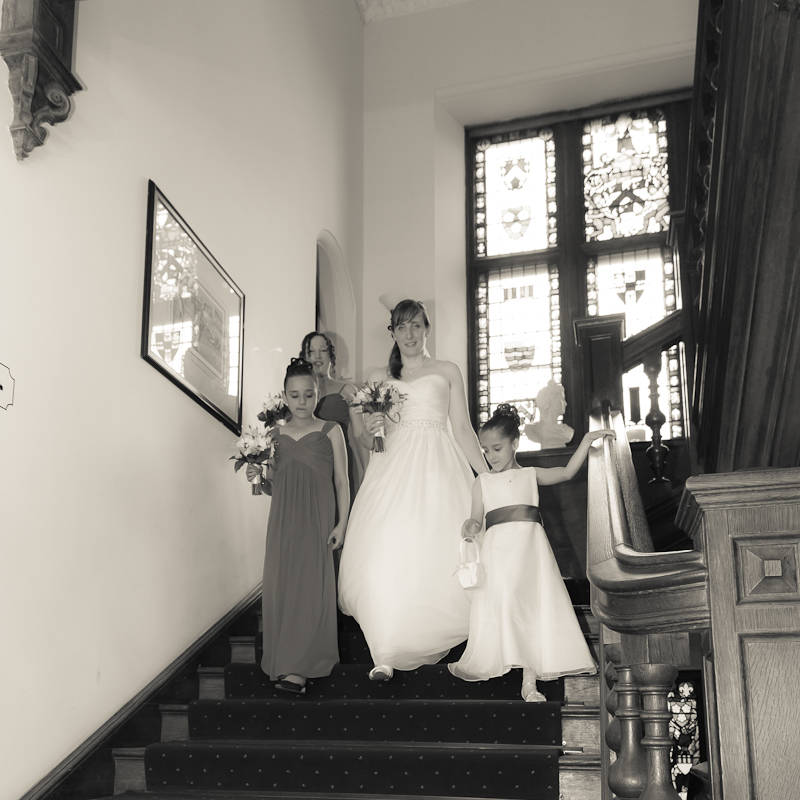 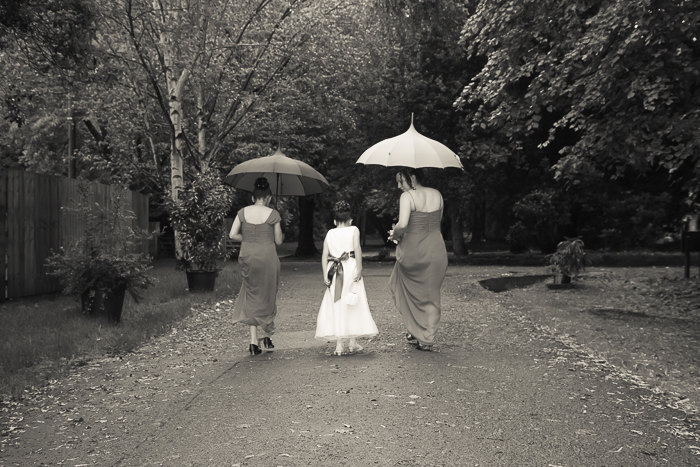 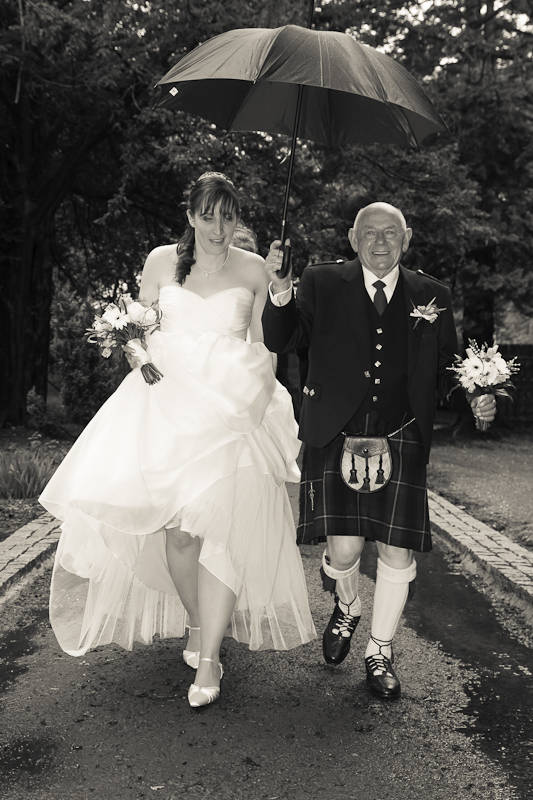 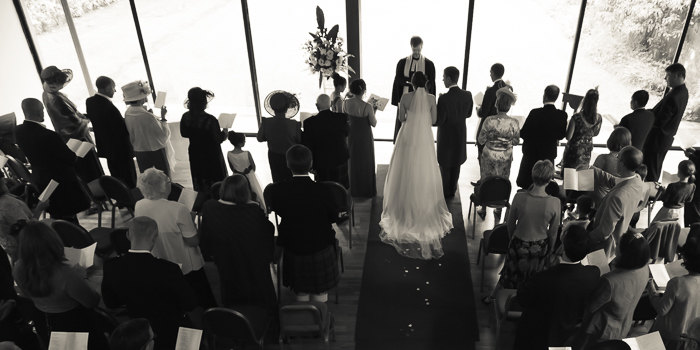 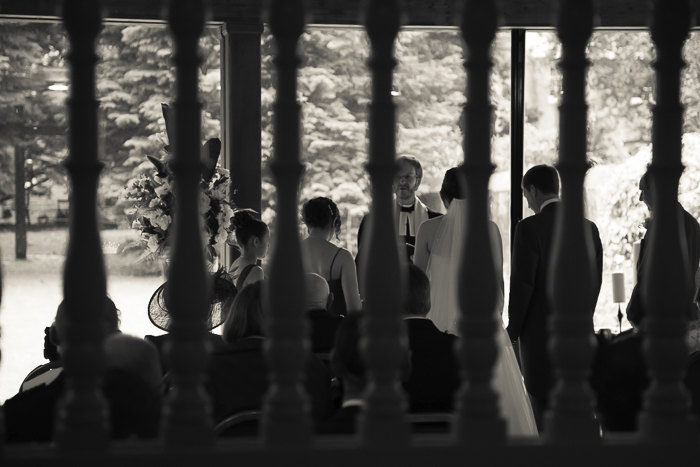 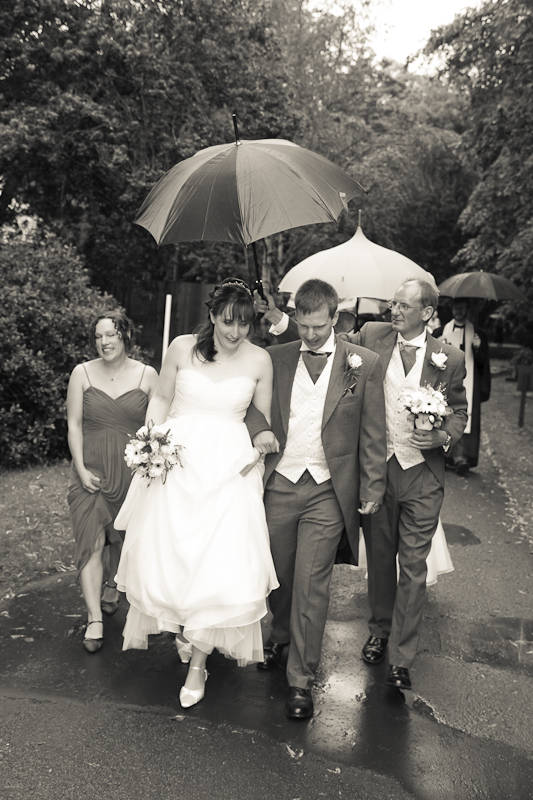 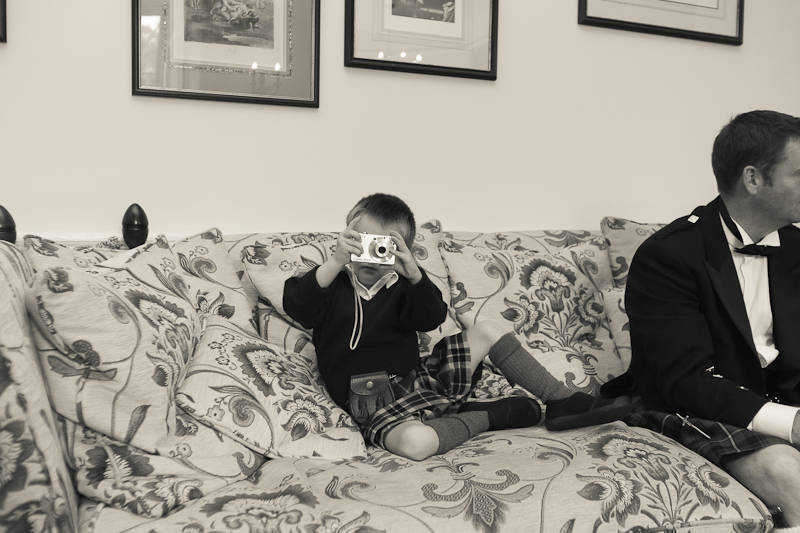 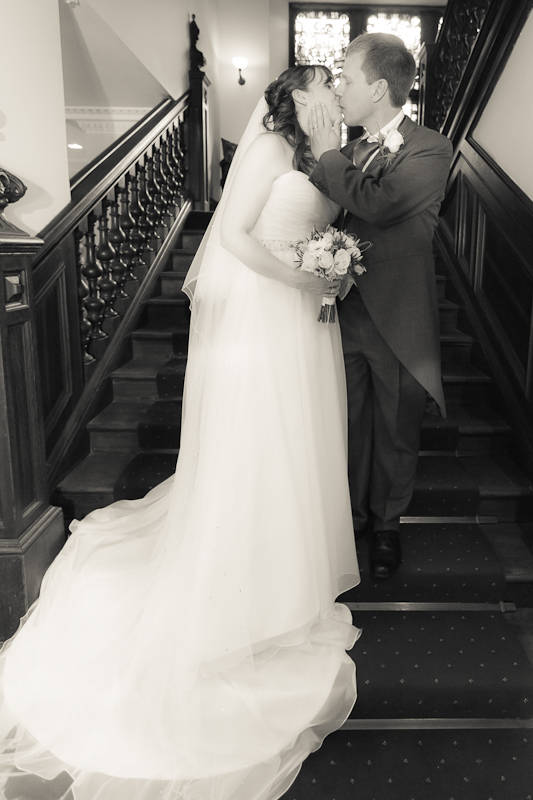 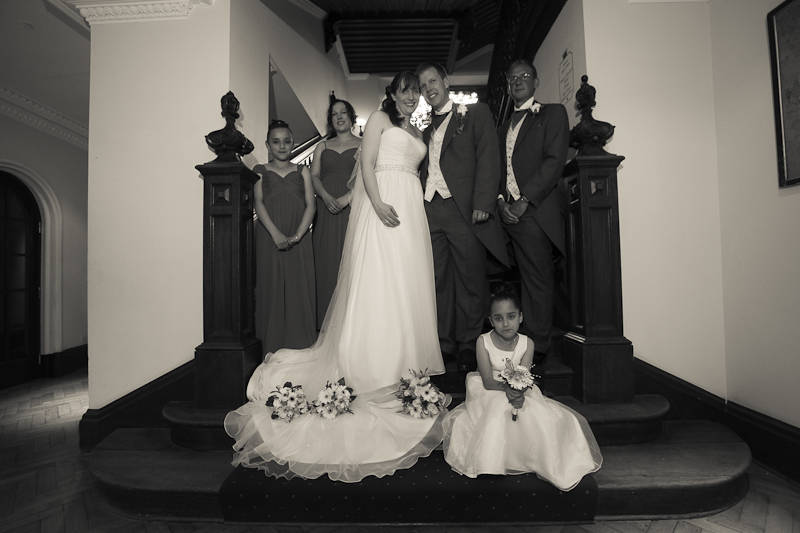 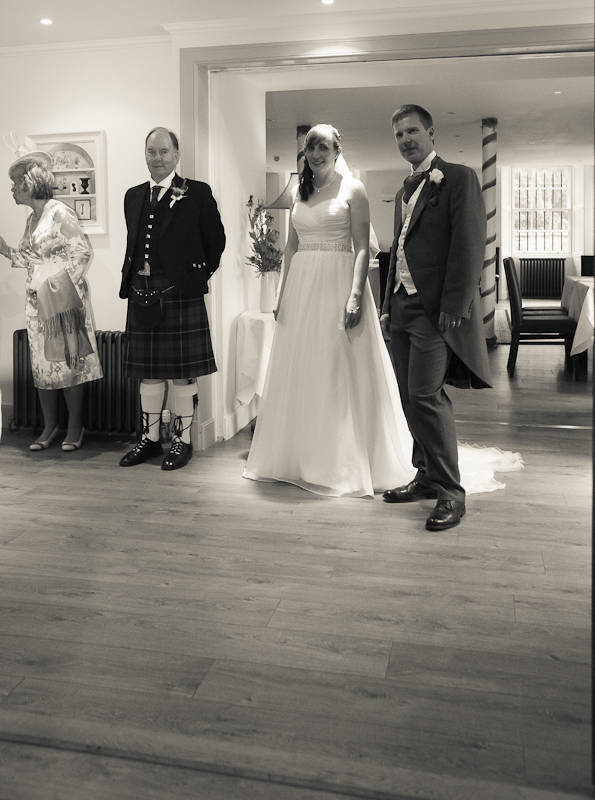 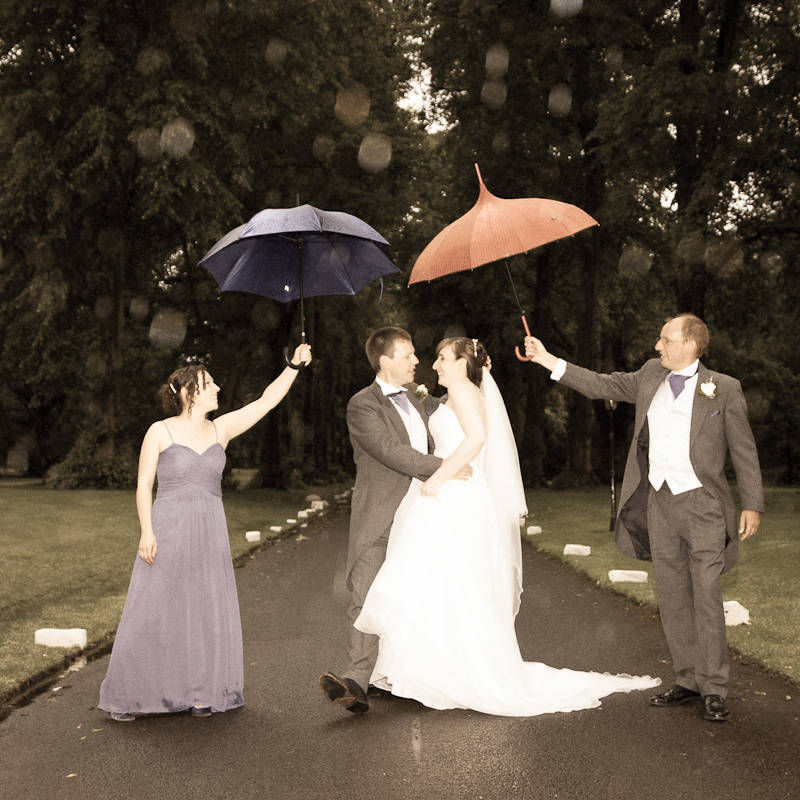